Ninja Captain Alex is hosting the... 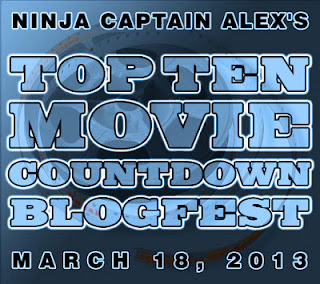 And I decided to participate.  A true countdown requires ranking, but I cannot, in all fairness, truly rank these.  The rankings would change with the wind.  These are ten OF my favorites today.  Listed in no particular order, they are...

Star Trek (the entire gambit)
But nobody does bad as good as Ricardo Montalban does.

Star Wars (yeah, all six!)
Let's hear it for the Wookie!!

The Avengers
I don't believe they could have done a better job with this movie.

Farscape: The Peacekeeper Wars
I cannot tell you how many times I've watched this. I so miss the series.

Serenity (The Firefly movie)
From a series that died before its time. Not shiny!

The Bourne Series (Identity, Supremacy, Ultimatum)
Not Sci-Fi/Fantasy, but close enough. My favorite changes with time.

A Knight's Tale
This one starred an actor that died before his time.

The Sixth Sense
The best thing (IMHO) Bruce did after Moonlighting.

I have watched these movies so many times.  I can quote way too much from way too many of them, and there is much within them worth quoting.