Still haven't returned to blogging yet, but I did want to honor Jo. I had the pleasure of meeting her and her husband in North Carolina back in Sept 2013, almost two months after my wife passed away. It was a great "blogging buddies meet in person" experience. We ate, bowled, played putt putt, enjoyed good ice cream and great conversation.

For my recipe, I'm divulging Grandma's secret for chicken and dumplings. I chose this one not because Jo was known as Grandmother Dragon, but because she specifically asked me for the southern buttermilk biscuits recipe, from which the dumplings in this recipe are made. 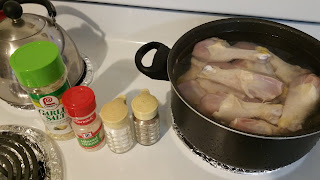 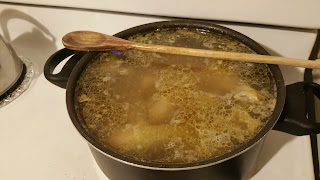 Add chicken and flavorings to a large pot of water and bring to a slow/soft boil until meat is cooked. Lower heat and allow chicken to simmer for a couple hours or more. Stir occasionally, adding water when necessary. (For best results, allow to cool after simmering and refrigerate overnight. Bring back to a simmer and proceed with following directions.) 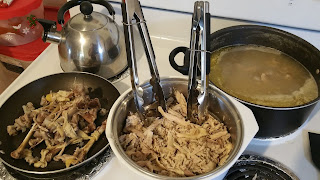 Separate bone and skin from chicken. I place chicken into a pot strainer and use two sets of tongs as meat will be hot. Return meat to pot and prepare dumplings.

Note: This makes the equivalent of ten 2 1/2 inch biscuits. I make enough to share so I typically make three or even four batches of dough/dumplings. 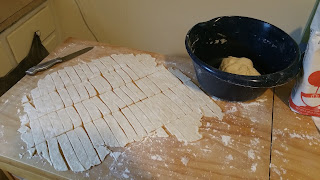 Combine flour and shortening in large bowl; mix well until mixture resembles coarse crumbs.Add buttermilk and knead dough until surface is smooth and no longer sticky.

Roll out dough until thickness is 1/8 inch or thinner.

Cut dough into strips of 2-4 inches long by 1/2 inch wide (or to preference) and place on large plate.

Repeat above steps for each new batch of dumplings. 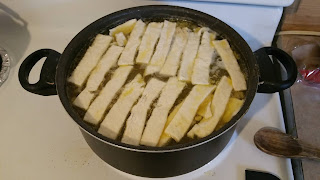 Add dumplings to broth strip by strip. Place them side by side and keep them separate; do not let them overlap. Once broth surface is covered, gently push them down just deep enough for the broth to cover them. Let the layer of dumplings simmer and begin to "rise" for several minutes and then repeat this process. Note: Adding the dumplings is done gradually. Do not rush the process or the dumplings may clump together or begin sticking to the bottom of the pot. 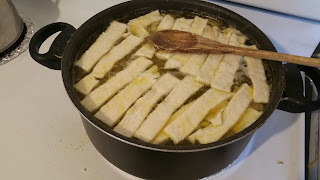 Let simmer until all added dumplings have "risen". Note: Flour from the dumplings will want to settle at the bottom of the pot and can burn. Use a spatula to stir the bottom frequently to prevent settling and burning. 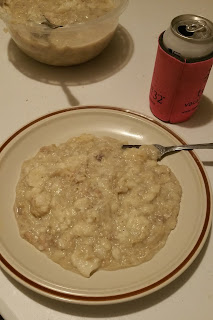 It can be served after all dough is "done" but I prefer to let it sit on lowest heat for a while longer. Remember to stir frequently as long as the pot is over heat.

Excess dumpling dough is not a problem. Serve portions of cooked dumplings and add more dough. Another option is to split the single pot into two pots and add dumplings (and water) accordingly. You can also freeze some or all for later or keep refrigerated. 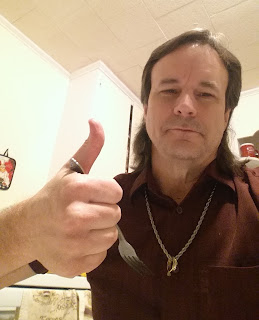 The "grandma secret" is in the how, not the what. Patience pays off handsomely. Take your time and enjoy the results.

Hello everyone! It's been a while since I last posted, like three whole years. It's entirely possible that I've forgotten how all this works.

I'd love to know how everyone is doing. Please, bring me up to speed. What have you accomplished? Started? Stopped? Any great things happen lately? Bad things? Made any momentous choices?

In Jeff news: My Flowers For a Dead Man story was included in the Writers Crushing Covid-19 anthology, available via Amazon and others. (All proceeds go to the Book Industry Charitable Foundation.) This effort was undertaken by the Piedmont Authors Network, a local writing group to which I belong.

I even did a reading of my story via Crowdcast back in August--a first for me. Numerous contributors assembled to read for the cause on three consecutive Saturdays. (I was the final reader in week #2.) There were some great readings all three weeks, certainly worth the viewing time.

And of course, my own personal goddess, Isis, allows me to serve and adore her as is only befitting her station (and mine). Better than six years running now, so she's got me rather well trained.

I'm still writing; actually, I'm rewriting "book one" of my epic fantasy. I'm still sketching and painting with acrylics, although whether I'm improving is debatable. I've also been dabbling with digital art and 3D Modeling. It's all quite fun and relaxing. Here's a sampling of my dabbling. 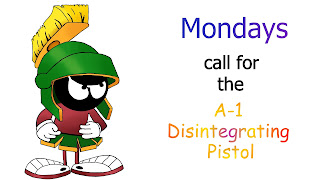 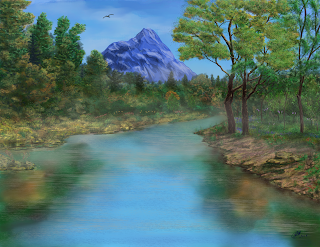 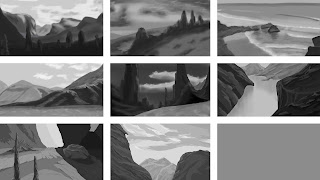 But mainly, I just wanted to drop in and say howdy to everyone, send out my hopes and wishes that your health and happiness has flourished despite everything 2020 has thrown our way. Never give up. Never give in. No matter what. Character is forged, not adopted. You don't get diamonds without a whole lot of pressure.
Stay safe!
Remain positive!
And write the world that suits you!
- Jeff
Posted by Jeff Hargett at 9:12 PM 14 comments: