Strands Of Pattern welcomes KateMarie Collins who is no doubt still happy dancing over her newly published debut novel.  She dropped by to tell us a little about her book, herself and more.  Please welcome KateMarie.


The obvious first question: What's Daughter of Hauk about?
Redemption, accountability, forgiveness.  The main character, Arwenna, has been set up to help a demon lord gain a foothold in her world.  Only she doesn’t know it until she’s executed and memories that had been hidden from her for most of her life come through.  She’s able to return and tries to stop the very thing she helped let loose onto the world.

And for those of us who find this tantalizing, when and where can we get it? 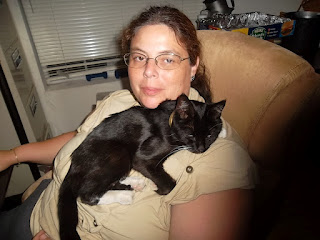 It’s available for sale via my publisher’s (Solstice Publishing) website, and also on Amazon and Barnes & Noble websites.

Is there a sequel in the future?
I’m still on the first draft of the sequel, but it is in the works.

What inspired you to write this story?
Many of the characters originated in a Dungeons and Dragons game that ended badly.  My character from that game, Arwenna, was resurrected in a different game.  There wasn’t any way to describe what happened in the game itself, so I wrote a short story about it and sent it off to my friends.  Everyone, including me, started wondering about what happened next.  Two and a half months later, the first draft was finished.

What about this book did you find most unsettling or difficult, and how did you come to terms with it?
Some of the things that happen to Arwenna that she can’t prevent weren’t easy to write.  Not necessarily because it was hard to describe, but because I’d been in similar situations in my life.  While therapeutic in some ways, it wasn’t easy to do to the character.

Considering everything you've endured working on this project, from idea germination to publishing, would you do it all again?
Absolutely.  The highs of getting a scene just right, having a contract offered to you, seeing your cover art for the first time, are all infinitely more satisfying than any of the lows were.  Sure, I got turned down by publishers before Solstice said yes.  But I’d rather keep working towards the yes than give up.

If Daughter of Hauk were made into a movie, who would you cast for the primary roles? 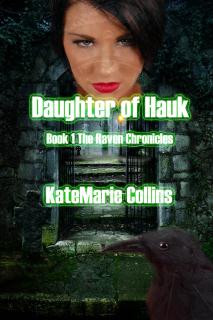 Keep in mind, this is very much a dream cast.  Some of the characters have some quirks about them that may only be found during casting…and in unlikely people.

What other writing have you done and where can we find it?
I’ve had short stories in both issues of Winters Night magazine and in the first three issues of LQQK magazine.  I’d like to continue working with LQQK magazine as time allows, as the staff is wonderful.

Are you working on any other projects at the moment?
I’ve got three different novels in various stages of a first draft.  One is the sequel to ‘Daughter of Hauk’, the second is more of a YA fantasy novel, and the third is an expansion on a story that appeared in the first issue of Winters Night.

Is there a book you'd love to write, but know you never will?  If so, tell us about it.
I like a good mystery, but I doubt I’d ever write one.  You really need to have a clear idea of not only who did it, but why and where to put out a clue or a red herring for the detective (reader) to follow.  I’m simply not that well organized.

Are you a "discovery writer" or an "outliner" (or somewhere in the middle?)
I write by the seat of my pants.  I have a starting point and an ending in mind and have great fun finding out what’s going to happen in between.  I live for a ‘what if’ moment that can take the story into a completely new direction.  I had someone compliment me on being able to hide and reveal things to my reader at just the right time.  When you don’t know exactly what’s going to happen on the next page, it makes it easier for the reader to remain in the dark as well.
Which authors do you most admire and does it show in your writing?
I loved David Eddings and the way he inserted a sense of reality/normality into his characters.  They actually behaved and talked like most people, stressed over being in positions to do great things, and doubted they could.  Nick Pollotta is another of my favorite writers.  He injects a tremendous sense of humor into his writing.  He’s one of the few authors that will make me laugh aloud.

As an author, what is the legacy for which you'd most like to be remembered?
As an author who created stories you remember, characters that stay with you. 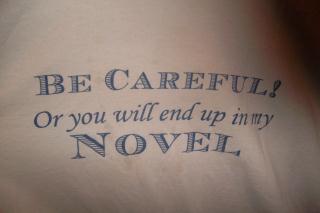 And as an individual?
That I faced my own fears and self doubt and didn’t give up after the first rejection.

Can you reveal a "secret" about yourself that almost no one else knows?
I’m a terrible critic of my writing and would stop every third word to correct something if I watched myself type.  To combat this, I type with my eyes closed and let my fingers find the words for the picture in my head.  I write about 90% of my stories this way.


What advice do you have for writers who want to see their work published?
Don’t give up.  Polish left and right.  Find friends you know will actually tell you the truth (over saying “it’s great” when it’s not) to give you feedback.  Be patient.  The internet has made submissions easier, but it still takes time.  Be polite.  Yes, it may be 6 weeks past the initial ‘we’ll get back to you’ date, but you should still be nice when you inquire where your manuscript is in the queue.

Do you have a blog, website, twitter-feed, etc. where your fan base can learn all you're willing to share?
I’ve got a Facebook Fan Page that I keep updated with blog interviews, appearances, and such.
On Twitter, I’m @DaughterHauk.  I just got started with it, though, so it’ll be a while before I update it as often as I do Facebook.
I have a brand new Blog: KateMarieCollins
You can also request a Kindlegraph from me!

So everyone, now that you have (hopefully) filed those dreaded tax forms and (hopefully) have a refund coming, consider taking a few bucks of it and adding KateMarie's Daughter of Hauk to your reading queue. And be sure to drop her a note in the comments!