I love lists and I love classifying things.  Catherine has graciously delighted me on both accounts with her Guest Post discussing the...

Are you a pantser or a plotter? Or maybe your method of writing a story doesn't fit either style? Well, I've discovered over the course of more than fifteen years of reading, conferences, workshops, and meeting other writers (from the novice to the multi-published and award-winning) that there are nine basic types of writers:

There may be more types, but let's look at these nine:

1) Pantser--one who writes by the "seat of their pants" which means the writer sits and types a story that unfolds, not knowing where the story will go but excited by the prospect of discovering the story.

The most common drawbacks are:

2) Plotter or Outliner--This writer is one who does pre-writing and planning before drafting, which nets a completed story and a better first draft. The plotter doesn't use the traditional Roman-numerals type of outlining. Their methods of outlining utilize various processes and diagramming, i.e., using "plotter's tools" such as:
The drawbacks to any type of plotting or outlining are:

3) Foundation Writer--the writer gets a story "dump," which is usually a scene (or the opening of the book) or a character comes onstage. Everything about the story can be extrapolated and plotted from the information contained or implied by the information dump. Often this writer employs various "plotter's tools" (mentioned above).

The drawbacks for foundation writing are:

4) Reverse Engineering--This is Backwards Plotting. The story begins with the ending-climax and works back to the beginning.  This is often a method used for mysteries and crime novels, thrillers, etc.

5) Piecemeal Plotting--As story information comes to the writer, it's in no particular order, but the various scenes are written. At some point (when enough scenes are developed), the scenes are sorted and a plot-order emerges.  Gaps are filled with additional scenes, and the story is fleshed out from beginning to end.

The drawback to this type of writing is the inability to tie all the pieces together. (This style of writing could benefit from "plotting tools" like a radial graph or clustering.)

6) Constructionists--This writer is one who does not visualize a story as they write but step by step constructs the story.  The writer relies heavily on logic rather than imagination.

The drawbacks are the same as those of the pantser.

The drawbacks are the same as a transcriber's and pantser's plus rewriting to eliminate speech repetitions (like "ah" and "and") as well as run-on sentences.

9) Multitasker--This writer starts one story until they run out of steam and sets that story aside to begin another story. When they run out of steam on that current work-in-progress, they return to the first. That's because while this writer worked on the second story, they figured out what to do about the first.  The multitasker then writes more of the first's story before switching to the next story.  There may be three or four stories going at once.

The major drawbacks are:

So, are any one of the nine types better than another?  Not really. Each writer must determine what's normal for them--which is done by trial-and-error. It's also not unusual for a writer to start as one type and end up as another.  And, by the way, it's not unusual for a story to need to be written a certain way, a way that isn't the writer's "usual" method. In other words, whatever works, works. 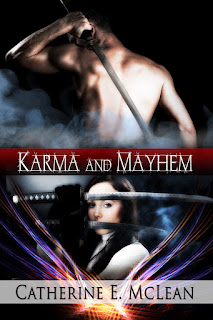 Catherine's paranormal-fantasy-romance novel, KARMA AND MAYHEM, will be published late this summer by Soul Mate Publishing.  Writing as C. E. McLean, she has sold short stories in science fiction, paranormal, and contemporary to hard-copy and online anthologies and magazines. She is also a writing instructor and workshop speaker (both online and in person)--her schedule is posted at her home web page. She sincerely believes a writer needs to be self-educated so she studies and reads extensively about the business and craft of writing--and addresses various elements of fiction writing at her The Sampler blog. She invites readers and writers to join her at Facebook, Twitter, or Linked-In.


Many thanks to Catherine for permitting me to host her fine article!

I think I'm a pantser with a dab of piecemeal.  Which are you?