Why Write a Trilogy by S. B. Knight

Why Write a Trilogy?

Perhaps I bit off more than I can chew. Maybe I overstepped and took on too much. But maybe, just maybe, I’m on the right track and moving in the right direction. Ah, but here’s the twist, there are no right directions or right tracks…there is only the direction you’re moving and the track you’re on. Why do I say that? Well, some authors believe it is crazy to write a trilogy as your debut work. It is common knowledge that publisher prefer debut novels to be well under 100,000 words (70,000 is the sweet spot). Everyone has their own thoughts on what makes a safe and smart debut novel. So, why did I go with the trilogy? Why did I ignore the words of others and attempt to blaze my own path?

Before I get to that I need to share a little about me first. I’m a big time fan of vampires, werewolves, zombies, and creatures of the night. No, I haven’t always been like that but, with age, we discover new things about ourselves. The thing is, vampire movies and novels were moving them in a direction away from the things that made them the apex monster to that of mysterious lover. Werewolves are following the same path but fortunately there are authors who are holding true to their basic essence. The bottom line is, and this is strictly my opinion, many of the monster movies and novels are becoming redundant and/or watered down. I see this as a challenge, an opportunity to test myself by attempting to write a unique and intriguing story. All authors want to do this but let’s face it, it’s tough to accomplish with a topic so thoroughly written about as vampires.

I knew I wanted to write a novel and I wanted to start with a vampire novel but I had no idea where to start. Fortunately for me there was a special on the History channel about the top 10 most notorious female serial killers. Of course, Elizabeth Bathory made the list and as I watched her story a small detail grabbed my attention. I started making notes centered on that detail. I researched Bathory and her history, plus I researched vampire lore from around the globe. A story took shape and expanded. The excitement was insane. I started writing as soon as I could see the story in my mind. Born of Blood was intended to be a standalone novel, however, the more I wrote the more the story grew. Remember what I mentioned before? I knew the story would go well beyond 100,000 words but the true question was – could I finish it in two books? Typically you don’t see a two book series so I stopped writing and picked up my note pad to make notes. The story unfolded with flourish and soon I saw everything unfold and become The Blood Chronicles trilogy.


I will be honest; it would be easier to write a standalone novel. Take, for example, Drago’s Revenge which is the sequel to Born of Blood and book 2 of The Blood Chronicles. In order for a trilogy to work properly the three books must connect. They must feed each other and move the story to the next book. Now, some novels have the feel of a standalone novel because the characters carry the story from one book to the next. A good example of this would be Terry Brooks works. Drago’s Revenge is similar to that but also carries the story itself which makes things difficult. You see, the middle book should tie up some loose ends but not enough that the third book suffers. It is walking a tightrope between keeping the reader involved and leaving some for the final book. I think I accomplished that with Drago’s Revenge. Would I do it again? Would I write a trilogy again? Absolutely! In fact, I plan to.

About SB Knight - Drago’s Revenge is the next step as SB Knight continues to pursue his passion for writing novels that deliver both thrills and chills. His desire is to improve the craft he loves with each novel he writes. He strives to deliver fresh, new ideas and stories in the Dark Fantasy genre. Currently he is writing the third novel of The Blood Chronicles.

When not writing, SB Knight enjoys spending time with his family and being outdoors. During a normal week he can be found on social networks such as Facebook, Twitter, and his blog The New Author. Easily approached, SB Knight enjoys chatting with readers and fans alike. Information about SB Knight, his books, and upcoming projects can be found at www.sb-knight.com.

About Drago’s Revenge - The birth of a child is a time for joy and celebration. For Sam and Reba, it is a time for concern and worry. Concern for what could be and worry for what lurks in the shadows. They both know Reba’s baby, Christian, is special. But Drago waits in the darkness, and he, also, knows how special the child is. He knows what the child’s birth means. Now Drago stalks them, waiting for his moment to strike and claim Christian for his own evil purposes. As he unleashes his sinister plan, Sam and Reba fight to survive and keep their newborn out of his clutches.

Chased by a group of would-be vampires manipulated by Drago, Sam and Reba are forced to abandon their home and find sanctuary in once forgotten locations. But they are not alone in this fight as family and friends arrive. Will it be enough?

Life will be lost, blood will be spilled, painful memories, and emotions will torment minds…all part of Drago’s revenge.

SPECIAL - From now until October 30 you can PRE-ORDER Drago's Revenge for $4.76 (that's 20% off retail price). PLUS, when you pre-order you get Born of Blood for free! That's right, save 20% AND get a free ebook! Pre-order Drago's Revenge today! 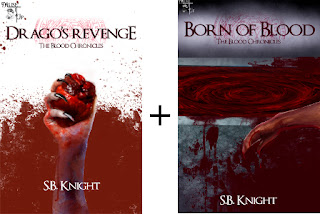