Once again, I've been given the honor and privilege of revealing the cover of an awesome author's book.  The awesome author is none other than Cherie Reich! And her awesome book is The Nightmare Collection!

And it's coming soon!

Cherie is impressive not only for producing quality stories, but for producing them quickly.  She understands and employs the elements of good storytelling.  If you haven't done so already, you owe it to yourself to give them a read!

About The Nightmare Collection:

A legend is hungry tonight.

A child monster will get its first taste of blood in Nightmare at the Freak Show. Four friend will enter the forest on December night, but only one can survive in Once Upon a December Nightmare. Almost ten years after Cassie's December nightmare, the monster awakens to hunt again in Nightmare Ever After. 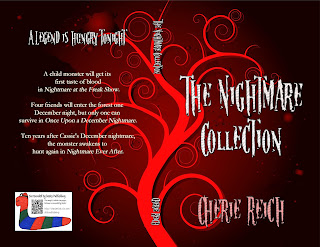 Author Bio:
A self-proclaimed bookworm, Cherie Reich is a writer, freelance editor, book blogger, and library assistant living in Virginia. Her short stories have appeared in magazines and anthologies. Her e-books include the horror series Nightmare, a short story collection with authors Aubrie Dionne and Lisa Rusczyk titled The Best of Raven and the Writing Desk, the futuristic space fantasy novelette trilogy Gravity, and The Foxwick Chronicles, a series of fantasy stories. She is a member of Valley Writers and the Virginia Writers Club.
Author Links:
Website: http://cheriereich.webs.com
Blog: http://cheriereich.blogspot.com
Twitter: https://twitter.com/bookworm0753
Facebook: https://www.facebook.com/authorcheriereich
Goodreads: http://www.goodreads.com/author/show/4268457.Cherie_Reich
Posted by Jeff Hargett at 12:01 AM