“We are in an inn, Lord Senyan, in a town by the name of Serenity. It is a mining community, on the shores of Lake Brahl. I...” Senyan raised a hand, cutting him off.

Nodding with understanding, Senyan let the curtain drop in front of the window again. “There is a ruin outside of town, about five miles or so. It was a temple at one time. Do you know where I speak of?” He didn’t look at the priest but rather began to rummage through a chest for what equipment may be there. 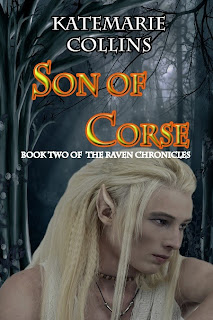 Blurb for ‘Son of Corse: Book 2 of The Raven Chronicles”
By KateMarie Collins

It’s been almost two years since Arwenna banished the Demon Corse from her world. Life has been good. Idyllic, almost.

The illusion is shattered in a heartbeat during her sister’s wedding. Not only are once-dead enemies back, but they’ve stolen Arwenna’s only child, Sera.

The price Arwenna will have to pay to save her daughter is high. Can she muster the strength to make a pact that jeopardizes not just her own soul, but that of an entire world? 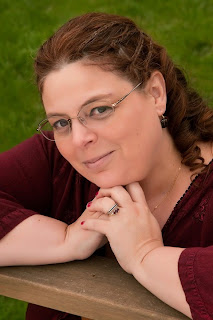 Born in the late 60's, KateMarie has lived most of her life in the Pacific NW. While she's always been creative, she didn't turn towards writing until 2008. She found a love for the craft. With the encouragement of her husband and two daughters, she started submitting her work to publishers. When she's not taking care of her family, KateMarie enjoys attending events for the Society for Creative Anachronism. The SCA has allowed her to combine both a creative nature and love of history. She currently resides with her family and three cats in what she likes to refer to as "Seattle Suburbia".

Email ThisBlogThis!Share to TwitterShare to FacebookShare to Pinterest
Labels: Daughter of Hauk, KateMarie Collins, Kick the Can, Mark of the Successor, Son of Corse, The Raven Chronicles