(This is being released a couple days early because I have a guest appearing on the 21st, which is when everyone else will be posting about their favorite Martian.) 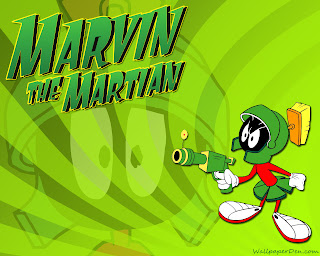 Without a doubt, Marvin is my favorite Martian.

He's hip on newfangled technology and an ardent supporter of the right to bear arms, possessing his own Acme Disintegrating Ray Pistol and being quite adept with a PU-36 Space Modulator. Without hesitation, he'll use both to defend the red planet known as Mars. 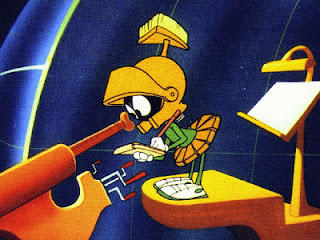 And I am convinced that we have Marvin to thank for the huge success of NASA's Spirit and Opportunity rovers. I fully expect we'll find a little Marvin DNA under one of those red rocks someday, possibly around the icy polar regions frozen alongside a biggie-sized telescope or an atomizer.

Marvin is definitely my favorite Martian--until you've made him very angry.

So who is your favorite Martian (or alien?)