The Beginning of a Dream

Beginning.  It's the first step to success.

I'm normally good with beginning.  It's the following through and finishing that challenges me more often than not.  This Beginnings Blogfest post has driven that fact home to me yet again.  I began this post at least half a dozen times.

What is it they always say? The longest journey begins with the first step.

I'm journeying on the road to becoming an accomplished author.  It's a lofty destination that requires much in the way of ambition, dedication and effort.

There were a number of steps I've taken, each (as I see it) a beginning. 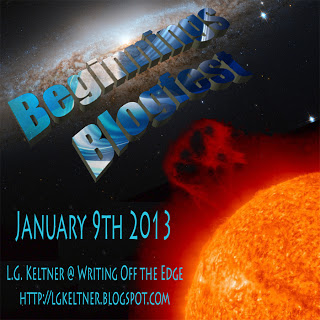 The first beginning was being singled out by an English professor at college.  She read to the entire class a brief paper we had to write "on the fly" during a previous class.  (Thankfully, she didn't announce who had written it. I had already slid so far down in my seat that I was almost sitting on the floor.) She later apologized for not giving me a "head's up", but said she really wanted to share it with the class.

This professor began encouraging me to write.  It was she who inspired me to improve.  It was she who kindled that first spark of the dream.  And it was at her urging that I wrote two short stories and submitted them to a contest.  When both stories placed in that competition, I began to believe I could write.

She told me there was a book dwelling inside me and that I had an obligation to write it.  Due to her insistence and my budding confidence, I began the process of writing my epic fantasy novel.

There were many bumps in that road I was traveling.  Doubts and insecurities assailed me at every intersection.  But in April of 2012, I wrote the final words of that book that begins my series.

With a short story now published, I'm one step closer to my destination.  I'm confident that the day will come when my books are published.  And it's all because I began to believe.

The Beginnings Blogfest is hosted by L.G. Keltner at Writing Off the Edge.