V is for Vader

Star Wars: A New Hope was the first science fiction motion picture I remember watching in the theater without parental supervision. I distinctly recall the moment I exited the building. I looked up at the night sky...and I wondered. 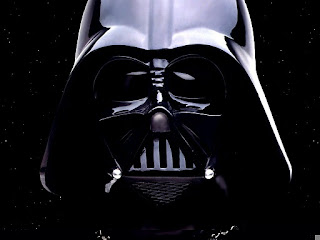 Was there a rebellion somewhere amongst those stars? Could there really be some kind of Force? Did a place exist where lightsabers and Tie fighters and X-wings were the tools of war? The universe became alive to me that night.  The thrills of possibilities excited me.

And Vader...what a marvelous villain. Everything about him was cool: his appearance, his voice, his...breathing.

Keep it a secret if you don't appreciate the ultimate villain. He'd find your lack of appreciation...disturbing. And that doesn't work out well for anyone.

Vader, with his bad sci-fi self, is the perhaps the coolest reason why I love science fiction and fantasy.

Email ThisBlogThis!Share to TwitterShare to FacebookShare to Pinterest
Labels: A to Z, Darth Vader, Star Wars