Y is for Tasha Yar

I really hated the turn of events in Skin of Evil. That's the Star Trek: TNG episode in which we lost Lt. Tasha Yar. Denise Crosby's character was by far my favorite, more than Picard, more than Data, more than Worf. 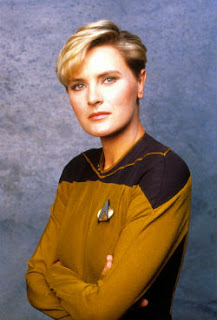 It took STTNG a good year before most of the characters really started settling into their roles. That settling was important because only then could the characters grow and evolve. I would have loved to see where her character could have gone.

There was something satisfying about seeing a female in the role of Chief Security Officer. She was competent. She was diligent. And she cut a much nicer figure than Worf.

It was good to see her resurface (in character) in Yesterday's Enterprise and All Good Things. I'd loved to have seen her in the movies too.

Lt. Tasha Yar is one reason why I love science fiction and fantasy.

Email ThisBlogThis!Share to TwitterShare to FacebookShare to Pinterest
Labels: A to Z, star trek, Tasha Yar, The Next Generation