F is for Firefly 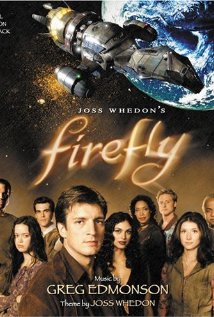 I almost went with the Force from Star Wars here, but chose Firefly instead. Firefly took science fiction in a direction it doesn't often go: a wild wild west frontier-esque direction.

The cast of characters were distinctly unique, interesting and ever-so-entertaining. They were a band of misfits scraping out a living by taking one shady job after the next.  A little smuggling here.  A heist there.  Scavenging and calling it salvaging.  And they did so all from the comfort of an antiquated ship always on the verge of falling apart.

Murphy wrote his famous law after watching this show.  The show lasted a single season and was wrapped up in Serenity, one of my favorite movies.

Firefly, with its fresh take and distinctive flavor is one reason I love science fiction and fantasy.

Email ThisBlogThis!Share to TwitterShare to FacebookShare to Pinterest
Labels: A to Z, Firefly, Serenity