P is for Picard 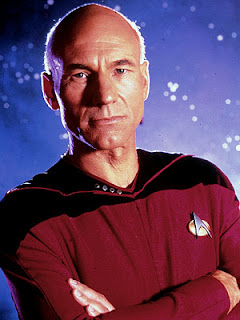 Patrick Stewart is a top-notch actor and did an excellent job of making Captain Picard a top-notch character.

Picard and Kirk were so different in so many ways, yet they both have dedicated fans and admirers. And many who admire one, admire them both.

Picard's refined sophistication was always being put to the test, whether he was dodging Lwaxana Troi, taking a holiday on Risa or bemoaning the fact that Starfleet allows children on Galaxy class starships.

As Locutus, he made a convincing borg. He was an entertaining Robin Hood and a rather cool kid in the Rascals episode.

He was quicker to talk his way out of a fight than throw a punch, but he held his own when punches were necessary. Any man who can impress a Klingon is okay in my book.

Captain Picard is one of the reasons I love science fiction and fantasy.


And a brief little clip showing what Picard loved most

Email ThisBlogThis!Share to TwitterShare to FacebookShare to Pinterest
Labels: A to Z, Picard, star trek