A is for Aragorn


...of characters like Lord of the Rings' Aragorn, son of Arathorn.

Tolkien introduced him to us as Strider, a Ranger of the North.  Only later did we learn that he was the heir of Isildur and rightful claimant to the thrones of Arnor and Gondor. 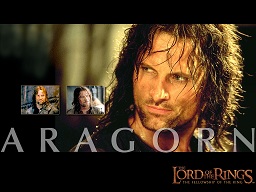 He was human and doubted his ability to prevail.  It was his ancestor that chose not to destroy the One Ring when the opportunity to do so presented itself.  That history gave him pause and caused him to doubt his own resolve.  "That same blood flows through my veins. That same weakness," he said.

But his resolve held true and his honor remained in tact.

This was no mere Ranger of the North.  Elrond's daughter, Arwen, chose a mortal life to marry him.  He returned as king and united Arnor and Gondor.  And his character is one reason why I love science fiction and fantasy.

And... A is also for Arlee, as in Arlee Bird from Tossing It Out.  All A to Z Challenge participants owe the prompting of their next thirty or so posts to him, seeing as how he created the challenge.  Thanks Arlee!  A is for you!
Posted by Jeff Hargett at 12:01 AM

Email ThisBlogThis!Share to TwitterShare to FacebookShare to Pinterest
Labels: A to Z, Aragorn, Arwen, Elrond, Gondor, Lord of the Rings, Ranger of the North, Strider